Fentanyl is a potent synthetic opioid similar to morphine and it produces analgesia to a greater extent i.e. 50-100 times more than morphine. A dose of only 100 micrograms can produce equivalent analgesia to approximately 10 milligrams of morphine.

It is a phenylpiperidine derivative which is structurally similar to pethidine and has become a common drug of abuse and an adulterant in illicit drugs because of its high potency.

Fentanyl is popular among the people with the street names such as ‘apace’, ‘china girl’, ‘china white’, ‘china town’, ‘dance fever’, etc.

Fentanyl is available in a water soluble, white crystalline powder that requires no preservative. The molecular formula for fentanyl is C₂₂H₂₈N₂O and molecular mass is 336.471g/mol. 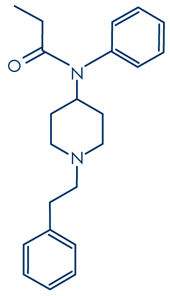 Derivatives of fentanyl include Alfentanil, Sufentanil, Remifentanil, and Carfentanil.

Fentanyl is administered intravenously (IV), intramuscularly(IM), transdermally as skin patches, intranasally in the form of a volatile nasal spray and intrathecally. Fentanyl IV or IM injections are indicated for short term analgesia during induction, maintenance and recovery from general or regional anesthesia.

Fentanyl is a mu(𝜇) selective opioid agonist. However, it has the capability to activate other opioid system receptors such as delta(𝛿) and potentially kappa(𝜅) receptors. This activation produces analgesia, a significant feature of fentanyl.

Dopamine level is increased in the reward area of the brain, which elicit the stereotypically associated with the addiction to the drug.

Since fentanyl is more potent than morphine and heroin, therefore it is produces more adverse effects which are:

Fentanyl along with other drugs(heroin, cocaine, alcohol, etc.) leads to synergism and causes undesirable conditions that complicate the patient’s prognosis.

Naloxone acts as a treatment drug to counteract respiratory depression and mental clouding.

Post mortem appearances of fentanyl poisoning are similar to those of the heroin which includes the following:

Fentanyl shows postmortem redistribution (process of diffusion of drug from the tissues to blood along a concentration gradient between death and the time of specimen collection at the autopsy).

Fentanyl is a synthetic opioid drug and have high medical application but also one of the dangerous drugs with high potency. Therefore, it is very important to use it cautiously in the hospitals. Also regulatory bodies should ensure its limited production and supply. Strict laws should be amended to prevent the illicit supply of fentanyl.

It is also the responsibility of the general public to be aware about the drug addiction from such drugs and use them only on prescriptions by doctors.