Building the brands stronger and take you to
the next level of business!
<strong>Postmortem Changes in Human Body</strong>

According to the ‘Law of Progressive Change’ everything in this universe changes with time. And this is also applicable after the death of an organism. Human body shows a lot of changes during life as well as after death. The changes that occur in the body after death are termed as postmortem changes.

Before discussing postmortem changes let’s first talk about what death is. So, death is not a phenomenon but a process. The process of death starts with somatic death [the process of cessation of the tripod of life i.e., the cessation of nervous system (coma), respiratory system (asphyxia) and circulatory system (syncope)] and then follows molecular death i.e. ultimate death of all cellular entities.

After undergoing the process of death, the human flesh undergoes numerous changes some may take just after death while some may take few hours to days. The process of postmortem changes are almost similar in all the death cases and hence the changes can help us to determine a lot about the cause, nature and time of death.

Postmortem Changes In A Dead Body

Postmortem changes are are categorized into three types i.e.,

As the name suggests, these changes occur immediately in the deceased, due to somatic deaths. The changes generally include:

These changes occur within 12-24 hours due to the molecular death and include:

The rate of cooling depends upon the factors like age of the deceased, clothings, place or medium  where the dead body was found, atmospheric temperature, condition of body, etc.

The late changes (after 24 hours of death) of the dead body includes the decomposition and decay which occurs in following stages: 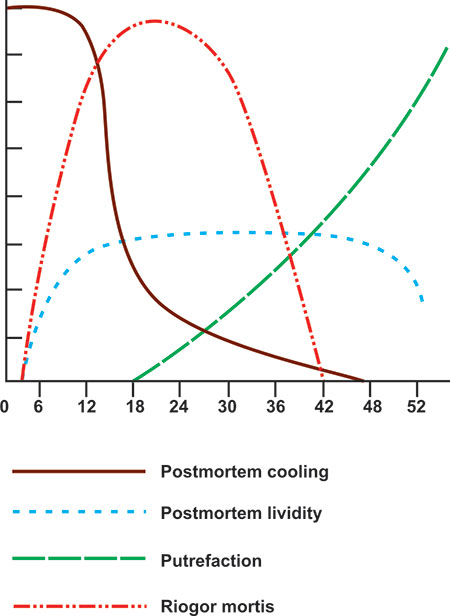 Image: Graphical Representation of Postmorem changes according to time

Death is a process caused in a systematic manner and this results in various changes in the dead body with respect to time. Different conditions around the dead body also helps in rapid or late decomposition of body. The cause of death also varies the time of decomposition.

The postmortem changes are the key for determination of time of death or postmortem interval, which is a very crucial aspect of death investigation. It can help the approximate time of death of a person and may reveal the cause of death.

In these times of distrust, our mission to be a universal symbol of trust has never been more important.